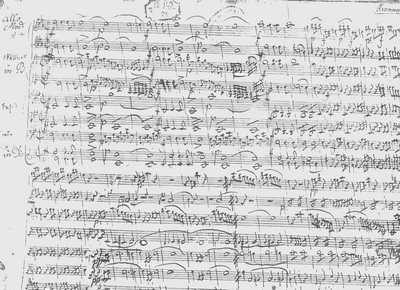 One of the most important composers of Harmoniemusik was Franz Krommer (1759-1832). His Partitas and Harmonies (ca 25 works still exist) are not only good music for winds, but also provide an interesting part to all musicians from the first oboe to the double bassoon player. Shown is the first page of the autograph score of his Harmonie (“La Chasse”) op. 71.One of Mozart’s lesser known contemporaries is the composer Franz Vinzenz Krommer.

He was trained as a violinist and organist and, later, in the early 1780s, he is reported to be “improving on his composition skills.”

His activities include a number of positions as organist, violinist and musical director for churches and courts in what is now Slovakia, Moravia and Lower-Austria. Around 1791 he settled in Vienna, where he became k.k. Kapellmeister and (the very last official Habsburg) Court Composer in 1818.

His large, mainly instrumental output (approximately 300 compositions) include brilliant partitas for windband. A partita or Harmonie in fact is a four movement symphony for wind ensemble.

It is believed, that he (who had no proven earlier acquaintance with windinstruments) started to develop a keen sense for this medium as musical director and composer for Count Károly’s regimental bands from 1787 to 1791 and later Anton Prince Grassalkovich de Gyarak’s band.

You are here:
Home